Develop Conference 2015 - Being a Mother != the End of Making Games

What is Develop Conference?

If you’ve not been before, Develop Conference in Brighton is probably the biggest UK developer event.  Amazing talks, free expo and of course fantastic networking opportunities (read parties).  This year marks my fourth conference, and this years felt very different as it is the first where I’ve taken on more of an active role.  Don’t get me wrong, attending the talks can be incredibly insightful and inspiring (check out Rami’s keynote for example).  Even if you just rock up to the bar and chat the day away with fellow developers you can absolutely get a lot out of the three days that is Develop Conference. It’s just this time I decided to sign up for the game jam and put myself forward as a speaker. 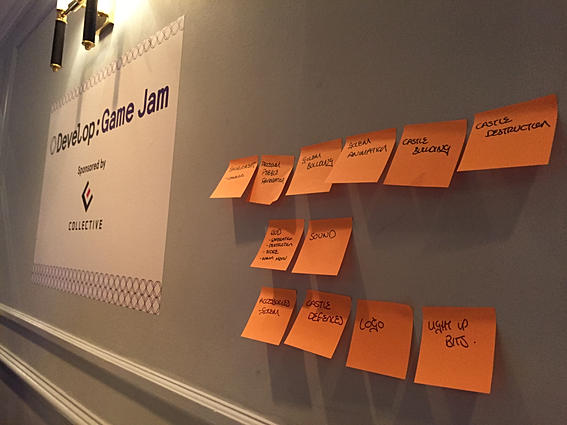 Way back in the year the call for speakers happened and so I threw my name in the hat.  Alex and I put forward a talk on how not to indie, Des put me in for a panel on how being an indie is not easy and I nominated myself as a noob speaker.  Well after the first two talks got rejected, third time was indeed the charm (pro tip here, if you really want to take part put yourself forward as much as possible!).

Closer to the day the announcement for places in the game jam surfaced and as it’s been such a long time since I last jammed (and I already had a babysitter for the week - thanks again Aunty Vicky) I booked places (Alex needed more convincing, but I booked him in anyway). 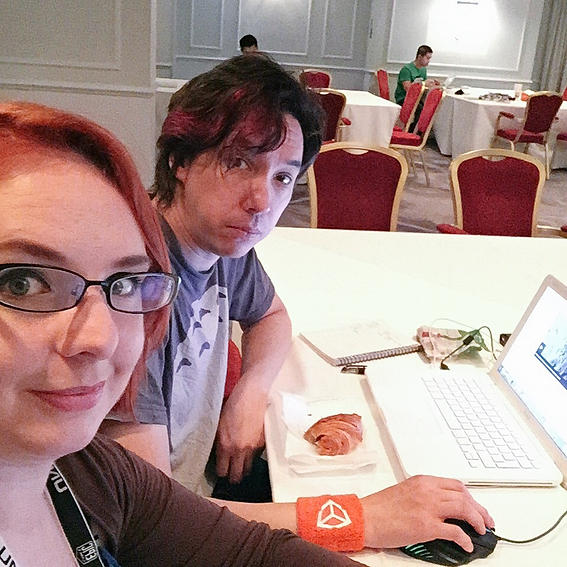 So 16 hours is a super short amount of time to make a game, but this is a jam and we’re all about the challenge!  Oli teamed up with us once more and we felt good about having a bit of fun with a silly little game.  So the theme was announced as ‘Pebbles’ and we were off.

Alex was all about using the pebbles as counters and to maybe revive ‘Trowerstone’* but this seemed really dull for me, and as the artist it wouldn’t leave me much to do apart from making the best goddamn pebbles 16 hours can buy… So I put forward the idea of using the pebbles to make tiny golems and BOOM!  Tiny Golem was born.  The POA we settled on was that we would have a box of procedurally generated pebbles with different statistics attached to them - big pebbles were slow with lots of health, small shiny pebbles were fast and flat pebbles were stable - the player would then pick 6 (head, body arms and legs) to create their golem who would then be unleashed on a sand castle.  The golem would attack the castle whilst the castle defended itself with cannons, the aim to destroy as much as possible before the tide came in.  The player would have indirect control over the golem, choosing to be defensive (and slower), normal or charging (fast but vulnerable).

We began.  Oli created the pebbles using shader magic and Alex wrote the animation (all in code, none of these fancy Unity animation tools) and I got onto some UI and sand castle production.  There was pizza and drinks provided (thanks Square Collective for sponsoring!) and by midnight on the first day we were quietly confident that we would get what we set out to do done.  If you’ve not game jammed before, this line of thinking is basically what gets you in trouble. 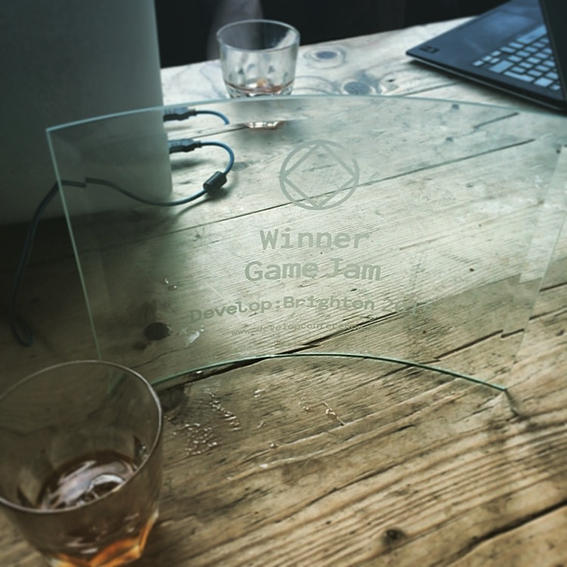 Next day and the final 8 hours and we had lots of lovely visitors and could see we were going to have to drop some stuff.  So Ken (Wong) was kinda right, he said we would get 45% done, I reckon we managed about 60%.  We also had a fab visit from Luca (Redwood) who gave us loads of coffee (if you want to make friends at a game jam - bring coffee).  So the tide was dropped (because don’t do water in a game jam) it became golem vs. castle and the indirect control was dropped so you really had to choose your pebbles wisely!  But we finished (right on the nose) and have a very playable game!

A very playable game that only went a won!  I knew there would be judging and a prize, but I didn’t realise the trophy would be so nice!  Now we can get the asymmetric multiplayer in where one player builds the castle and another the golem, and more defences, leaderboards and sharing to social media.  If anyone would like to fund the mobile release we also have plans for golem resurrection, gatcha special pebbles and for monetization ;)

The jam was a nice distraction from the bubbling fear that was starting to surface as the talk drew nearer.  I maybe didn’t really think this through. I’m not very good at public speaking, I absolutely want to be a positive influence in the games industry and particularly for women and parents, but that means I have to put myself out there, so here I am bidding for a full talk slot at next years conference.

The format for the talk was, a group of new budding speakers had 3 minutes each to talk on one of a collection of topics and then be rated by the audience.  I chose ‘What I Learned by Accident’, which basically gave me license to talk about anything in my indie career as it all began ‘by accident’.  I almost didn’t talk about being a parent and an indie developer, but after a confidence boosting chat with another female game lady dev and on reading an article about ‘mother shaming’ in the workplace (it’s not just games that struggle) I decided to run with it. 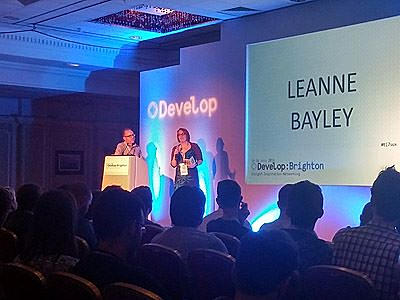 There is a drop in the number of women in the industry in their mid 30s, and we think it is because they are having children and not coming back to the games industry.  The point of my 3 minute rant was we should hire more parents. Why?  Because if you want team members who are not just committed to making good games but also committed to your business succeeding then hire people who have responsibilities outside their work that mean they really, really need to hold down a job!  Obviously we’re not going to want to work overtime, or crunch (because no one does), but to make sure we can leave the office on time we will work harder and smarter in the time we have.  No one multitasks like a parent.  For example, whilst waiting to give the talk, I was texting my sister instructions on how to prepare dinner for Willow.

Well the talk seemed to resonate with the audience, after all the talks were given and the cheer-ometer had whooped it’s last whoop, I was declared the winner!

Now I have 12 months to prepare to do it all again, but this time maybe stress less about my talk!  So back to work it is, and hopefully some more talk opportunities along the way!

*A game for another post methinks.
Posted by Unknown at 03:58 No comments: